Congratulations!
You won!
Time of solving the puzzle:
In order to save your score, please log in.
Login
New Game!
Sudoku - hard

When you fill a square with the correct digit, the number will turn green, but at a certain point of the game it is possible that more digits could be correct. If at that certain point the digit is incorrect, it will turn red. It is possible that after filling the other squares, some of the digits written down previously won’t be correct anymore. In this case the number won’t change its color, you’ll have to find the incorrect digit in the grid.
We recommend the ‘hard’ level to those who have already played a lot of Sudoku and are not afraid of a more challenging puzzle. On this level, the board already contains 31 digits. You’ll have to examine the table thoroughly. Many times there seem to be several correct options at a certain point, you’ll only find out later which was the only correct solution. The goal of the game is to fill the 9×9 grid with digits from 1 to 9 in such a way that every number can appear only once in each row and in each column, also taking into consideration that each subgrid consisting of 9 squares can contain these numbers only once. 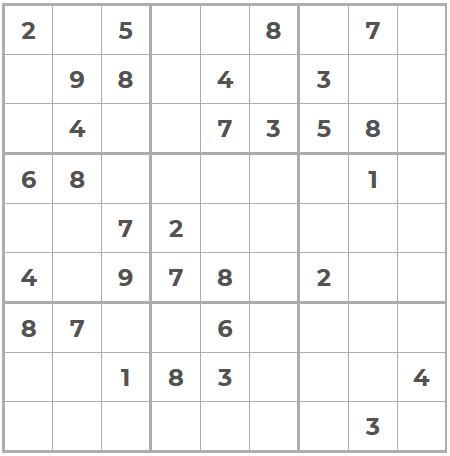 If you select the easiest level, there are already 24-25 digits in the grid when you start the game. In round figures it means 30% of the grid.
It first appeared in a U.S. newspaper, and then The Times (London), in 2004, thanks to the efforts of Wayne Gould, who devised a computer program to rapidly produce unique puzzles.